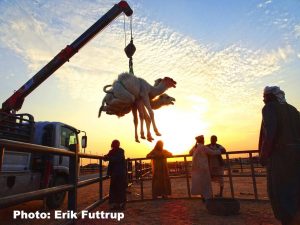 Invited by my friend Abu Sultan we had baby camel in the Old Town (Old Dir’aiyah) of Riyadh. A great meal in a great setting. Earlier on the trip we had ”Mashroosa” as a desert – (flower, sugar, butterfat and honey – in a very, very sweet dish) – everyone including our local guide and driver put his own spoon in and out of the bowl – ‘this is a close you will ever get to making out with a saudi man Mikkel my trip companion said. 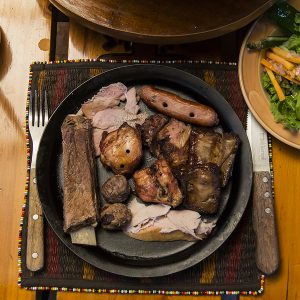 Many tourists go to restaurant Canrivore in Nairobi – so many that the restaurant now itself has become a tourist attraction. Normally they offer Zebra, Kudu, Crocodile, Ox balls and Ostrich Meat Balls on the menu.

We (Charlotte and I) got this from a little local street vendor. The fluffy white substance inside our brain tasted somewhat sour and it is one of the very, very few meals worldwide that subsequently sent me looking for a lavatory. 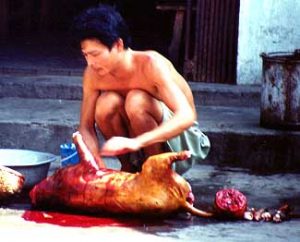 Dog is quite common in China (where you can even eat cat in special restaurants). The meat was quite fat and it was difficult to taste much since it was served in a hot chilli sauce. 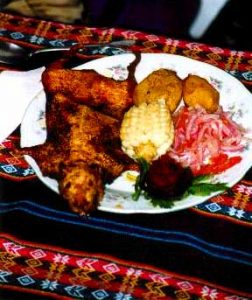 In Colca Canoyn (also known as the valley of the condor) a few restaurants serve grilled Guinea Pig. Mine still had it’s teath so it was sought of laughing at me before I ate it. 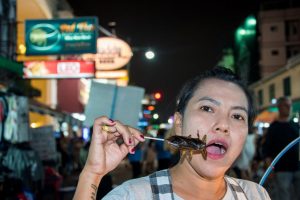 In the last couple of years (2018-2019) it has become very popular to eat deep fried insects such as skewered cockroaches and scorpions or giant spiders in Bangkok. They typically cost just 50 Baht (about 1,5 USD) 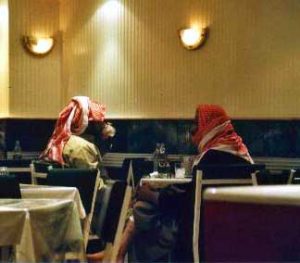 I had this in the Karnak bar and restaurant near the Martyrs Square in Damascus, Syria. We visited before the war (in 2002). Charlotte and I went with Omar a english/iraqi guy from our Al-haramein hostel. He spoke arabic and got talking to the Lebanese and Saudi guy who were drinking at the neighbouring table. We all ended up going for a ‘belly dancer show’ afterwards – that turned out to have more than belly dancing on offer (read more here)

3. Rat on a skewer, Countryside, Laos 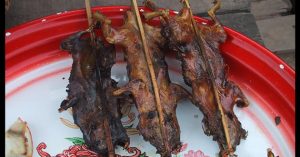 Allegedly these rats ‘were not sewer rats but breeded’ – still I gave them a miss. Never know were such a dirty little rodent has been.. 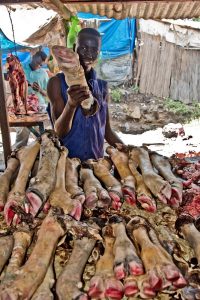 The bottom part of the cow legs are sold on the infamous and very big Konye Konye market of Juba, South Sudan. Every part of the cow is used. Like the rats I didn’t actually eat these. 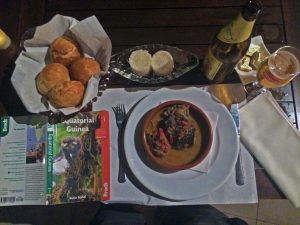 Equatorial Guinea is infamous for consumption of illegal animals such as porcupine and various monkeys (perhaps even the very rare mandrill?). I visited a restaurant that had Giant Sea Turtle as the ‘dish of the day’ – The locals eat this dish all the time I wass told by the spanish couple running the restaurant. The Green Sea Turtle is an endangered species – and should not be consumed. I am very sorry to admit that I did taste a small portion (very fishy, very green, not very well tasting). Sorry!

The below listed animals have all been eaten by someone from the Every Passport Stamp facebook group (!).

I asked the “What is the strangest food you have ever eaten?” question in the Facebook group for the World’s biggest travellers – thank you so much for all the replies – here are most of the animals mentioned:

8. Little Auk (Greenland, fermented, eaten after having been buried in the ground for a year)

1. Tiger (on the border of Thailand, Myanmar  – they killed it in Myanmar and it had traveled days to Thailand.)

Or a Cows head perhaps? 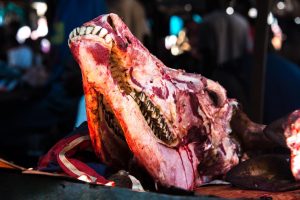