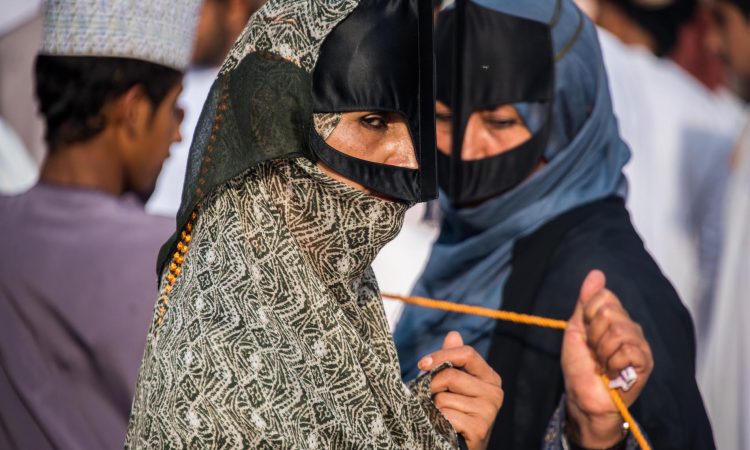 After Eritrea – my 196th and final country – a rather old FlyDubai Airbus takes us to Dubai in the United Arab Emirates. From there we have rented a small Chevrolet Aveo to take us on more adventures in the Emirates and in Oman. (Trip report from the UAE incl Abu Dhabi, Atlantis and the wild traffic in Dubai will follow).

Oman is a revisit for most of the family. In 2008 when Ava was just 1 ½ years old – and Jonas was not yet born – we did a very similar route to the one we are taking now. But we come back since a 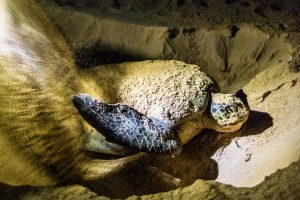 stopover in Dubai didn’t cost us extra and since we wanted to show Ava (who couldn’t remember anything from her previous visit) and Jonas the giant turtles at Ras Al Hadd and the Friday goat market visited by many Bedouins in the town of Nizwa.

The roads of Oman are good, wide and straight. The highways have many lanes and almost no cars. The petrol only costs 0,6 USD pr litre. The only real challenge is not to be blitzed by the many speed cameras. Rumor however has it that you can go up to 20 km per hour over the speed limit before you get fined (and I pretty much stick to this and don’t get any fines).

Our 24 OMR (60USD) pr night (for 4 people) guesthouse (Ras Al Hadd guesthouse) is just what we need. Situated right at the easternmost tip of the Arabian peninsula and smack on the beach right where the turtles are coming ashore every night. We are where an estimated 20.000 giant green 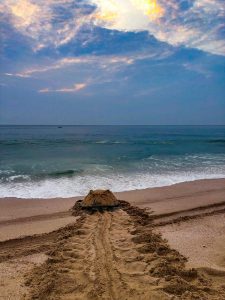 turtles annually dig holes and lay their eggs on the shore. Typically, they weigh 100+ kilograms. Our room has a huge balcony with a fresh sea breeze (which is nice with day temperatures nearing the 50 deg Celsius in the shade) a pool and a great view of the wide coast that seem to go on forever.

Every night at 9 pm and every early morning at 4.30 am there are guided tours starting from the Ras Al Jinz Turtle Reserve (20 km from our hotel, OMR 7 adults, OMR 1 kids, 1 OMR discount possible for adults with voucher from hotel). Even though it is past the children’s bedtime we take the night tour (that turns out to start half an hour early at 8.30 pm – so we almost miss it). Unfortunately, this tour is nowhere near as good as our similar tour 11 years before. We see less turtles and there are more tourists and the guide rambles on forever. But we do get to see a few giant turtles laying eggs and a few others venturing out to sea after completion of their egg-laying-business.

Even though I have driven for 8-9 hours from Dubai on the day of the night turtle watching I don’t get to bed until midnight and get up again at 04.25 am to go down our local beach and try to find 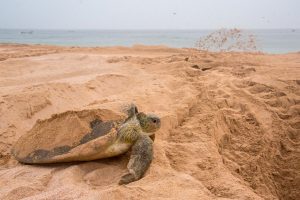 giant turtles myself. After 15 minutes of hard walking along the beach in the very soft sand I already have my first private turtle encounter. Apart from a little light from the full moon and the stars it is still pitch black. It is so dark that I don’t realize that behind my newfound friend two other giant turtles are digging their own nests in the sand. Before the sun breaks through the thick clouds the turtles head for the sea leaving their characteristic zig-zag trail.

As the sun rises, I can see countless bobbing heads of giant sea turtles. The turtles are known to

mate in the water where the updrift apparently helps them conduct their dirty business. Even though the sunrise is not spectacular it is a magical moment and – except for a few early morning fishermen in their boats – I have it all to myself.

A few days later we arrive to the traditional town of Nizwa. Nizwa is particularly known for its weekly Friday market where goats and cattle are on sale. The animals get auctioned in the early morning hours before it gets too hot. When we last visited, we almost missed the action arriving too late – this time we arrive at 6.30 am. 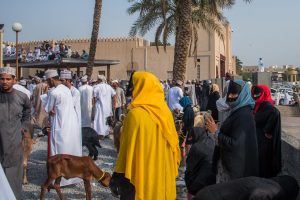 Only to find out that there are absolutely no parking spaces.  This week’s market turns out to be the perhaps biggest market of the year since it is held only two days prior to the Eid ul-Adha  – ‘the second Eid’ – celebrating the prophet Ibrahims willingness to sacrifice his first born son Ishmael. On this occasion most families chose to sacrifice an animal – hence a lot of goats and cows are on display this morning. We park the car rather illegally at the outskirts of town and hurry back to the action.

Every local man and boy are wearing spotless long white gowns and round Omani hats. “Tamam 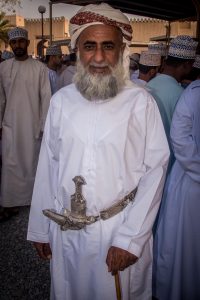 Sadiqi” I shout happily (hello friend in Arabic). “Mia Mia” (“One hundred One hundred – meaning I feel a 100% ok) a few of them reply. Everyone is smiling and I can take as many photos as I want. Only a few elderly women are present. They are all Bedouins and they all wear a so called batoola a facial mask making them look a bit like Zorro. Like a Niqab it is worn to cover the face but also it keeps away sand, sun and dust from the face.

Goats, cows and bulls are dragged around in a big circle while bids are made. From time to time a cow goes crazy and starts kicking violently while the crowd flees in panic.

Our last days we spent in capital of Muscat. Our hotel Nasseem is right on the waterfront 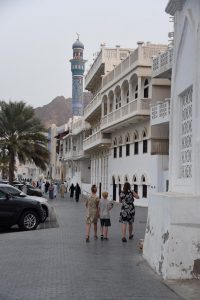 (“corniche!) with a spectacular view of the white city of Muscat surrounded by mountains and ocean. Here we visit the fish market where we are lucky to arrive just as a giant shark is dragged on land.

On the day of departure, we pay Rachael MacIver a visit. Rachael is a super cool Danish woman who has lived in several countries and has worked for the British military. She presently resides in the Qantab suburb of Muscat and works as a photographer. Since she lives here, she gets invited to festivals where tourists normally 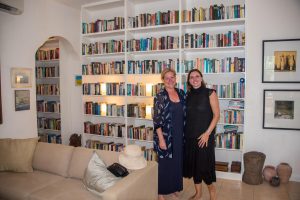 don’t go and there, she captures amazing portraits of the locals and their customs. A few weeks before coming here had no idea who Rachael was but after having seen her in a Danish television travel program (‘Anders and Anne in the Middle East’) I wrote her and asked if she had time to meet for a cup of tea. Luckily, she agreed and she kindly invited our whole family to visit her in her home in Qantab. The home looks like something straight out of a home décor magazine and Rachael is both a super kind host and a super interesting person to talk to. We have a long day of driving ahead of us so our visit is all too short but nevertheless we have a great time with a very interesting person who is at the same time both a westerner and a ‘local’. We even manage a quick visit to the local beach and to quickly meet a few of her sweet neighbors.

After having now visited Oman three times (the second visit was to Salalah in 2018 when going to Yemen) I must say that Oman is one of my very favorite countries in the whole Arabic region. Civilized, organized, loads of interesting and different attractions combined with the sweetest, forthcoming and most hospitable locals. Someday all the Worlds other tourists may realize the same.