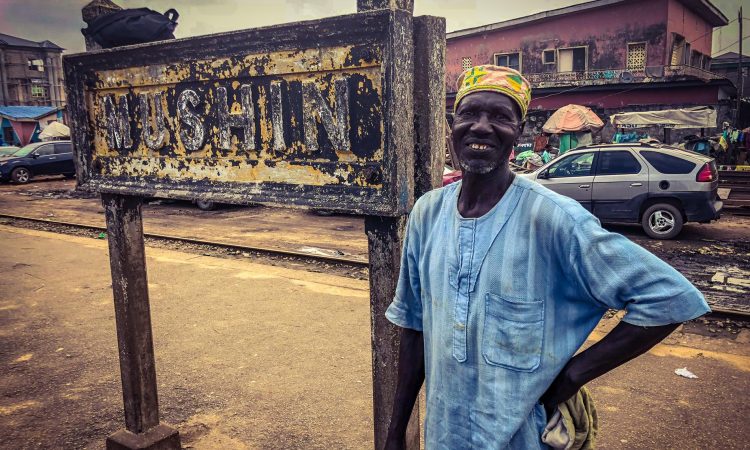 Before I depart for Lagos I am much more worried than I usually am when leaving my home country. Through the years I have heard a lot of bad stories about violence in Nigeria in general and in Lagos specifically. Maybe my anxiety is caused by my recent rough experiences in Libya and Guinea. Maybe I am just fed up with over-populated African megacities with insane traffic and where you don’t know if you can trust the police.

It is dark when I land at the Murtala Muhammed Airport in Lagos a Friday night around 8 pm. On my way I got a lucky free upgrade to business on the first leg to Istanbul. From there I had the pleasure of sitting right behind a Nigerian man in economy who spent almost every minute of the next 7-hour flight blowing his nose in a blanket kindly supplied by Turkish Airlines. Finally, I arrive after a long day’s journey.

The airport is surprisingly well organized, and I easily enter Nigeria on my visa that earlier has been very far from easy to obtain. Massive road works around the airport forces my taxi to go on 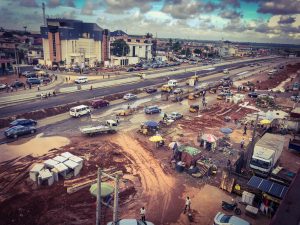 terrible red dirt roads, but apart from that arrival and getting to my hotel is easy. Allegedly arrival is not so easy if you come on work days between 8-12am or 3–7pm where all traffic grinds to a halt. (I am later told that a one-hour ride can take 10 hours when traffic is extreme!)

Primarily I have come to Lagos to meet adventurer and fellow Dane Charlie Uldahl Christensen. It is safe to say that my journey here has been faster than his. While I have spent 14 hours getting here he has spent 3 years and 4 months WALKING here (starting in Esbjerg, Denmark)!

At 9pm I arrive at my hotel near the airport and call Charlie on WhatsApp. He is at a dinner with other Danes residing in Lagos including the newly appointed Danish consul to Nigeria. They have 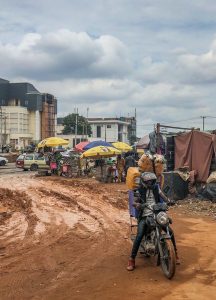 just finished eating traditional Danish pork roast. “Come meet us at a bar” Charlie says. However I am super tired and not up for another hour in a taxi so instead I just go to bed.

The next day I hire kind Sebastian as my driver for the day (10.000 Naira – app 25 Euro). It is Saturday and there is not much traffic, but we still wait until 11 am to totally avoid queues. From the mainland we breeze across ‘the third mainland bridge’ – one of Africa’s longest bridges – firstly to Lagos Island and then on to Victoria Island. Along the coast and under the bridges people live in corrugated iron shacks. It looks as poor and overpopulated as I have seen it anywhere on the continent. Later the same day I shall meet Charlie in one of the slum areas of Lagos and I speculate if that area will be equally poor.

Our first stop is the Nike Art Gallery (thanx Randy Williams for the recommendation). A six-floor 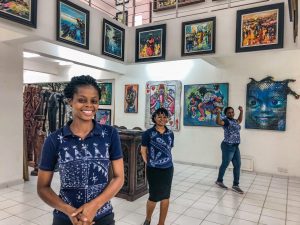 private art gallery and (surprisingly) one of the top sights in Lagos (where sights are few and far between). All art is produced by local artists and I am fortunate enough to meet a few of them. A lot of the art depicts everyday Lagos situations such as overcrowded markets and bus stations.

After the gallery we drive to meet Charlie in the slum. Both Charlie and I are members of the ‘Travellers Club of Denmark’ we have communicated over the years, but we have never physically met. Soon we will – if I can find him.

Charlie calls his project ‘Walking for Water’. He is on his way to a village in Tanzania to which he has raised money for a solar powered water pump. Before finishing his project, he is now spending a year working for various beneficiaries in Lagos. One of those is the Lagos Food Bank who regularly hands out food and medicine various places in the slums of Lagos. Today such an event is held in the district of Mushin. I am a little anxious as I approach the place in Sebastian’s car. All I 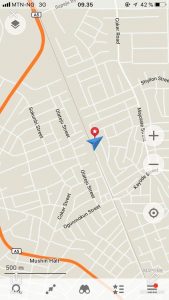 have is a map that Charlie has sent me. It has a small arrow showing Charlies position and many small roads few of which have street names. From this map I have tried my best to transfer the position to Google Maps. I hope I got it right I think to myself as we drive deeper in to the slum.

In the end the roads get so narrow that we have to park and continue on foot. In front of us is a white tent. Music is blaring from big loudspeakers and four policemen are sitting on white plastic chairs. Obviously, they have never heard of anything called Lagos Food Bank – and they insist that we have come to the wrong place even though my GPS is showing that our destination is only a few hundred meters away. From Sebastian’s phone I call Charlie – but he is surrounded by loud music. “The food handout starts now” he shouts and continues “I cannot hear you – just try to find the Bioko policestation – we’re next to that”.

Exactly at the position I have plotted on Google Maps and next to a police station we soon after find an open square crowded with women and children lining up for food. In a sea of black people 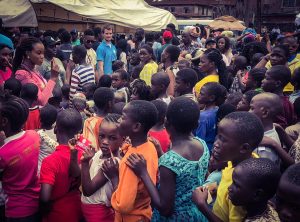 Charlie stands out like a snowman in a coal mine. He smiles. Everything seems very well organized – there is lots of volunteers and the whole area does not seem as poor as I have feared. Most houses are made of brick and while people may be poor they are all nicely dressed, and their clothes are clean. On the backside of the tent’s vaccinations are given and health checks are performed. Charlie and I are the only white people and we both get interviewed for Nigerian television. Also, we are asked to pose with various signs for the local photographers. One of the signs announces that “Helping others is the secret ‘sauce’ to happiness.”

The next couple of days I hang out with Charlie on the rooftop terrace of my hotel. All we do is talk, eat and (in particular) drink. We eat Eba and Jollof rice and drink lots of beers. The cold local 600 milliliter bottled beers cost only 500 Naira (1,2 Euro). They are branded ‘Star’ and ‘Hero’ – appropriate names when listening to my fellow countryman and his wild project. He tells me 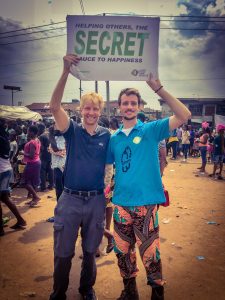 about his journey. About the potential dangers ahead. About his dream of helping the poor and making the world a better place. Instead of just working a regular job saving money for ourselves back home like all the rest of us. Lots of travel stories are told – and hopefully the story Charly tells me will one day end up on print.

Since I only spent a few days in Nigeria one could argue that less time should have been spent drinking and talking. But Charlie is an interesting person on an adventurous mission and we have many friends in common and many stories to tell. And while my visit is of course way too short to serve a big country like Nigeria any justice I still find it to be a special visit. Meeting adventurers while they are still on the road is thrilling and gives a different perspective than meeting them when they are back home where reality bites.

Thanks a million, to Charlie for sharing his incredible story and inviting me to the Lagos Food Bank event. Also, a special thanks to Hans Petter Hans Petter Stølsvik for helping with good information 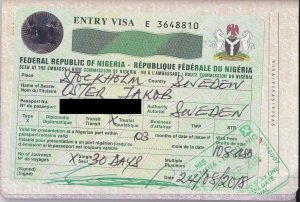 on the visa process for the embassy in Stockholm. Thanks also to the postal service of Norway for still selling the old fashioned postal coupons (and sending them from Norway to Denmark in order for me to send them to Sweden) that are the only valid way to pay for return postage at the Stockholm embassy.

(all photos shot with iPhone8 – sorry for the poor quality)

PS If anyone wishes to apply for a Nigerian visa at the Stockholm embassy the third last picture in the album shows the very few relevant documents the embassy requires.