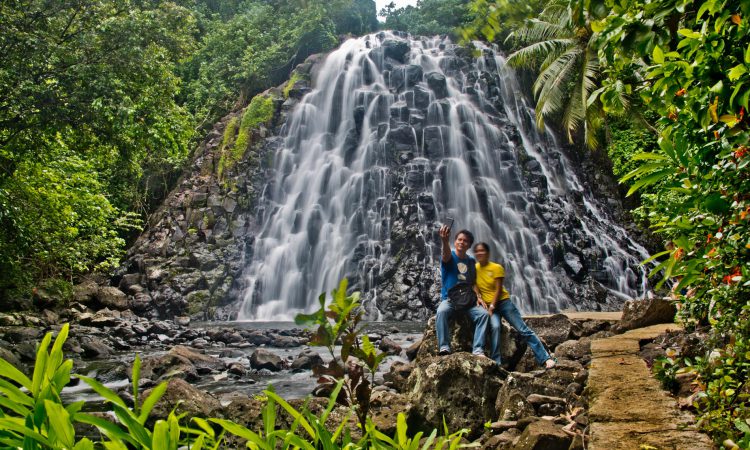 Today you will hear a little of the country Micronesia. 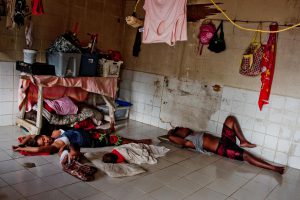 Klat picks me up in the airport. She is young and tall and forever smiling. “my name is Klaaaat” she says pronounced with an a that seems to last forever. I haven’t asked for an airport pick-up, but Micronesia is not receiving many flights so Klat just came because I had made a reservation at her hotel. A nice beginning. A nice beginning that further improves when Denis from France who I have spoken to only briefly in the airport of the Marshall Islands a few hours previously kindly comes and ask me if I want to join him and his colleagues for a sightseeing trip around the island the following day. My original plan was to rent a small motorbike like I usually do on these islands. But Denis, Ian and 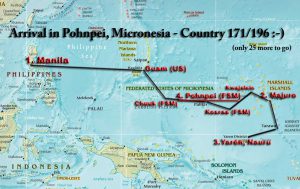 Caroline – who are all working for the World Bank on a project covering how to regulate the fishing in FSM – seem really nice. As an added bonus Caroline lives on Pohnpei and seems to have great local knowledge – so I happily accept their kind offer. 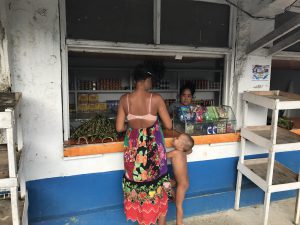 will be able to find none to rent. A nice guy by the name of Perdus Ehsa later gives me the obvious explanation: “It rains all the time here. Who do you think would want to be on a motorbike?”

Expertly Caroline navigates the big Toyota Rav SUV along the twisting roads around the island. We stop to watch locals betting on the Sunday cock-fight. We see locals playing volleyball and old beaten up cars overgrown by jungle. We also pass three young guys who are pounding stones against strange roots lying on at flat stone. They are grinding the roots until they get a haylike structure. “They are making sakau” Caroline explains. “They press the hay with hibiscus fibres and squeeze 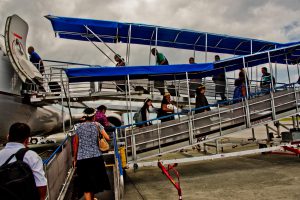 the juice out of it”. That way a narcotic drink with a local anesthetic effect is produced. “Sakau is a bit like the Kava they make in Fiji” Caroline says “only it is much stronger”.

Like every other island in this part of the world Pohnpei is volcanic. But where most volcanoes on other islands have submerged this volcano still looms over the island. It takes us an hour and a half to get to one of the star tourist attractions (of which there are few) of the Pacific: Nan Madol. 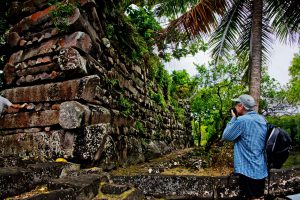 It would be an exaggeration to say that there are tourists all over the place at the “Venice of the Pacific” as the place is sometimes referred to. In the two weeks I have by now spent in the Pacific I have met zero tourists, zero travelers, zero backpackers. Nan Madol is no exception to this rule. Also it would be an exaggeration to say that Nan Madol is easily accessible. Even though Caroline lives on the island and has visited before we get lost trying to find the narrow and unmarked jungle entrance road. When we finally find the basic parking spot we meet a local guy who claims to be a local chief and asks us for the 4 dollars entrance fee. We then walk for about a kilometer through mangrove forest on paths constructed by sharp stones. Finally, we need to cross about 30 meters of the ocean on a bed of mud and rocks. Wading in water waist high I manage to lose one of my sandals when it gets stuck in the mud. The lost sandal I have borrowed earlier this morning from a nice 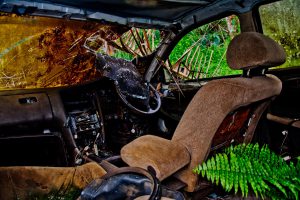 elderly guy at my guesthouse (only one hundred dollars rent an hour he said with a smiling face showing his two missing teeth) so it needs to be found. However, that is easier said than done balancing my daypack with camera equipment on my back while in water that is too deep for my hand to reach the bottom. After a few minutes of desperate struggle, I manage to dig it out of the mud with my foot. If Micronesia was interested in attracting more tourists a little bridge here might be a good idea. 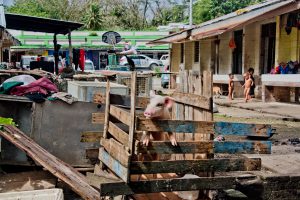 Beside of the lacking accessibility Nan Madol is impressive. Supposedly built around the 7th century and consisting of 80 artificial islands in the Pacific Ocean on which stone temples have been built. Building blocks are hexagonal and cut out from rock or basalt. Legends have it that “hunanies” occult magicians made the building blocks float through the air and fall into their right place.

We eat our lunches at a close by waterfall. Caroline tells us that over the years all the surfer champions have come here to Palikir Pass to try it out. She also says it is a very tricky place to surf 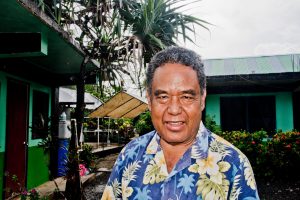 when the waves are high since they break so close to the reef. “Once we had two Australian hardcore surf brothers” she says, “one of them fell and got thrown around like a tennis ball in a tumble dryer and ended up with his anus cut open by the sharp corals of the reef. He almost died”. I am thinking that that would be a bad-ass way to go. 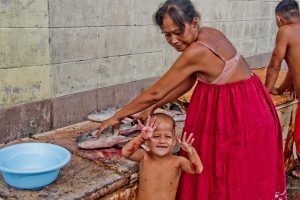 I have come here in the middle of the surf season, but still I see no surfers during the almost four days that I spend in Micronesia. The “P-Pass” is known to be both one of the best surf spots in the world and one of the least visited.

The next day I go for a walk in Kolonia the islands main city. Everybody I meet are smiling and greet me warmly and loudly. I cannot remember being in a country before where people so heartily are welcoming me. It is overcast but suddenly the sun breaks through the clouds. I fiddle with my sunglasses trying to get them out of their cover in my pocket. Now this may sound exaggerated 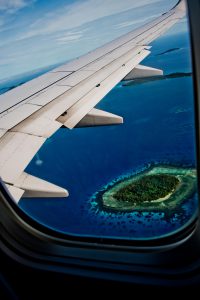 but the moment I put them on heavy rain is falling. It is unreal. Less than 30 seconds ago the sun was shining and now it is suddenly pouring down. Within the next hour and a half it rains violently six times. Each time it suddenly clears up again almost momentarily. I begin to understand why nobody here is riding motorbikes.

I linger a bit in the residential slum on the edge of town. Everybody still smiles and invites me in. Under ramshackle roofs and behind doors that are simply hanging pieces of plastic I peer into people’s lives. Lives that are only moving very slowly forward. I peek into rooms with children playing and plus sized women lying half naked around. They do not seem to mind the leatest that a tall white guy suddenly takes photos of them sleeping their day away. Rather they seem pretty curious and excited that something different is suddenly happening. 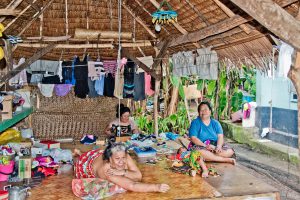 “Hi chief” I say to a guy that I randomly pass by on the street. “Yes” he says, “the chief is in here”. I have no idea what he is talking about but I decide to follow him to find out. It turns out that Chief Caleb Gamule is actually inside the building I was just passing and this little misunderstanding has now led me to him. The island of Pohnpei consists – the assistant to the chief tells me – of 11 municipalities and the friendly chief Gamula is apparently head of one of the called the Kaping Gamarangi district. We talk for a while and he invites me for a cup of sakau. It comes from a normal bottle (as opposed to the Fijian ceremonies where kava is served in a large bowl) and is served in a cup made out of half a coconut. It tastes a bit stale and – just like cava – it makes my lips go almost 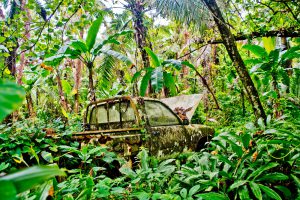 instantly numb. I can feel my body relaxing a bit but apart from that and a bit of dizziness when I later stand up I don’t feel any wild effects. “Can you get a photo of the chief displayed in a newspaper where you are from” the chiefs assistant asks. I tell them that I can try but that there are unfortunately no guarantees. 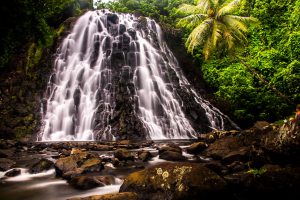 When I return to my guesthouse I meet a guy named Elder Tuluak. He looks Melanesian but speaks with an American accent. He introduces me to all his very American looking friends. They are all around 20 years old. The first friend I shake hands with also goes by the name of Elder. So does the next. And the next. And the next. In fact, all seven of them go by the name of Elder. I look around to see if there is a hidden camera somewhere. I have no idea what is going on. They are all wearing white sharply ironed shirts and ties and “Elder” nametags and over their shoulders they each have a bag of clothes for washing. “We are missionaries” one of the Elders explain “Since it is Sunday we are in 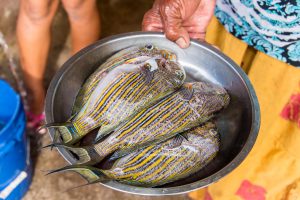 for some R&R” Elder Tuluak says. Not being a native English speaker it takes me a little while to realize that this must mean rest and recreation. “Yeah we are just washing clothes today and then we are going fishing” Elder number one tells me.

Not until later – when I speak to the manager of the sea breeze restaurant – I realize who the “Elders” are. “They are Mormons” he explains, “they will try to trick you to believe what they are believing” he says. 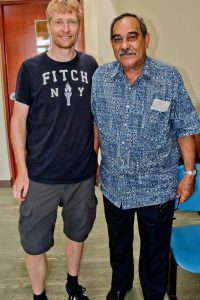 him out to me. His name is Peter M. Christian. Earlier on my Pacific odyssey I sat next to the former foreign minister of the Marshall Islands. This time I run into the President himself. The President of the Federated States of Micronesia. While we wait for our flight heading towards Guam we talk for a little while. “Thank you for visiting my country” Peter Christian humbly says, “here is my business card”. The business card simply states his name under it simply says “President. The Federated States of Micronesia”. There is no information on how to contact him. I hand him my private “Travel writer and Photographer” business card instead of my professional one. “I like private business card more” he sympathetically says. I hope he will go to my Facebook page and friend me or that he will chose to follow Expedition Everywhere. How cool could that be to have a president following you on Facebook, hehe.

That is all for now – sorry I wrote too much again. Remember to check all photos also those at the 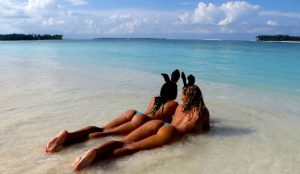