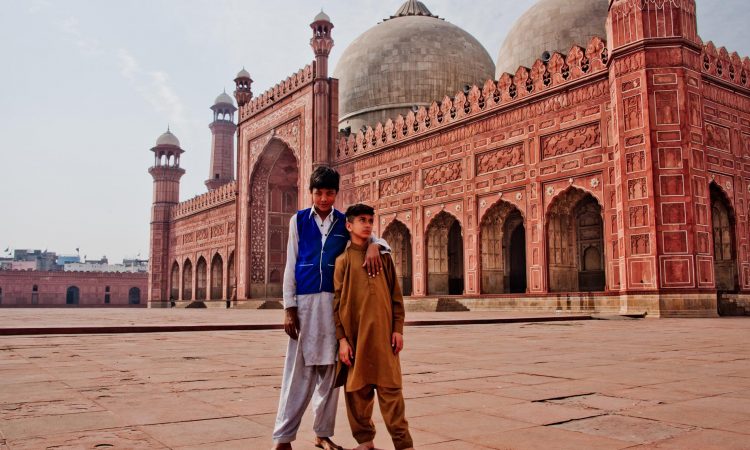 Getting from Dhaka in Bangladesh to Lahore In Pakistan – the last stop on my trip – is not easy. There are no direct flights. Instead I initially book a Pakistan International Airlines flight via Karachi. A bad idea it turns out. PIA is often described “as the most unreliable international airline in the world”. And of course my PIA flight to Karachi gets cancelled – without the airline finding it relevant to inform me about the change.

Instead I fly with Sri Lankan Airlines via Colombo, Sri Lanka (not exactly a shortcut, but hey). The plane is an old Boeing from the days when everyone had twice the legroom we normally get on 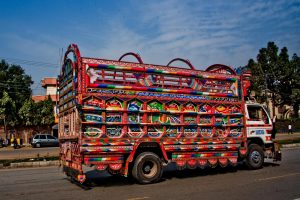 today’s flights. The flight is 6 hours late in departure and therefore turns into a night flight operating from 2 am to 6 am (Sri Lankan time). At least the plane is not cancelled – the next available plane three days later would mean I would have time for transit only in Lahore.

Half an hour after we have landed (where local time is still 6:00 because there is a half hour time difference between Sri Lanka and Pakistan) I am in a taxi at a check point just outside the airport. 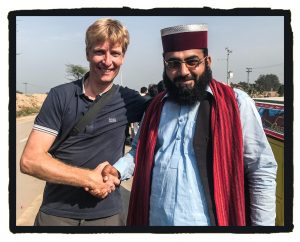 The driver’s name is Ali and by now he has already offered me hotel rooms, hookers and marriage with his younger sister. In the dark outside the car window, a military guard stands with an AK47 and abruptly orders me to hand him my passport. Normally, at check points I just hand over my laminated copy, but being so near the airport I assume the officer needs to see also my visa and entry stamp so I give him the one of my two passports that I have just made entry with.

As my passport vanishes in the dark night Ali – who has been briefly outside the vehicle talking to the soldier – gets back in the car and sets it in forward motion. “We have to turn around and go back” Ali says as he is going forward. I have no idea what is happening. It is dark. I am tired. I have flown for a day and a night. I don’t have my passport. And we have to turn around but are going straight. “We are just making a U-turn” Ali says and almost a kilometer further down the road he

turns and heads back to the check point. So on top of not being able to use the highway into town a nice little u-turn detour gets added as a bonus. Thank you very much Pakistan. I get my passport back and we start our 20 minutes non-highway detour on narrow, bad roads. “The army man was a fucking stupid idiot” Ali says. “He wanted 1.000 Rupees (8USD) to let us pass”. Apparently Ali found this offer to rude to pass on to me and just went for the detour.

“Are you a tourist or a terrorist?” Asks one of the two Mohamed’s I have just met. They present 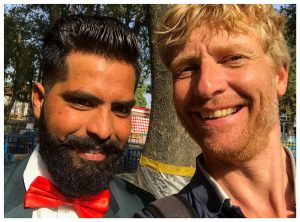 themselves   with both first and middle names. A common thing here when your name is Mohamed like everyone else. They tell me that they have taken the train to Lahore for 24 hours from the Balokistan province. They also inform me that they are ‘students of information technology – but that there are no jobs available when they graduate’. I meet them at Sozo Water Park outside Lahore. After a couple of hours of sleep I have come here to relax after my night 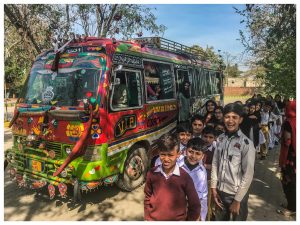 flight. Until Mohamed and Mohamed show up, I’m the only guest in the huge water park (maybe because it’s being partly renovated, maybe because it’s Monday morning and everyone’s in school or at work). Apart from the fact that the 2 x Mohamed would like me to get them a job in Copenhagen and a permanent residents permit to Denmark now that we have known each other for five minutes they are good people. Why they think I look like a terrorist I never find out.

The owner of the water park is also named Mohamed. He helps me get a taxi and buys me a cup of ‘Chai’ while we wait. One of his employees is getting married today and half a cup of tea later I am invited to the wedding. Having attended a few weddings in different countries I am expecting it to be a night full of  selfies with the strange foreigner and many conversations in non-English (Urdu, Hindu, Arabic) and being a little tired I decline the kind offer. But as always travelling in Muslim countries I am amazed by the hospitality. There is no chance in hell that a Pakistani person just arriving in my country would be invited to someone’s wedding. Unfortunately in all likeliness he would not even be offered a cup of tea.

I mainly get around using Uber. 26-year old Yaseen with a huge beard like that of a Mujahedeen drives me the 15 kilometers to Lahore Fort in his little Daihatsu. He has no children but he is 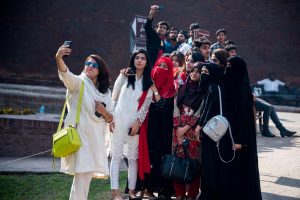 getting married next month. Today I am not receiving any wedding invitations – maybe because I tell him I am only in town for four days. The advantage of using Uber is that it is often younger guys like Yaseen operating these speaking good English and knowing a lot about the places we pass on the way.

I see no other western tourists as I wander around the Lahore Fort (entrance ticket for westerners 500 Rupees, for locals 10 Rupees) and the Badshahi mosque. Both iconic and beautiful buildings who I would guess would be swarmed with western tourists had they not been located in Pakistan. 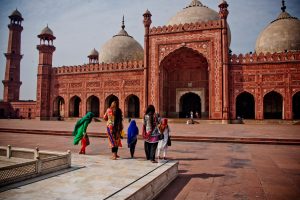 I take a portrait of two nice bearded guys eating soft ice in front of the mosque. One of them appreciates this so much that he also buys me a soft ice for taking his picture.

I have no data access to my Uber app (I do not have a local SIM-card and 1 MB of mobile data costs me USD 7 so I have turned mobile data off) so going back I take an auto-rickshaw. The price is 300 Rupees (or about the same as 300 KB data). Traffic is dense and chaotic (though less chaotic than in Dhaka). Roads are populated by trucks, rickshaws, bicycles, cars and ‘qingqi’s (Chinese produced auto-rickshaws with seats facing both front and rear). My middle-aged rickshaw driver has not yet reached the Uber-age and he looks with disbelief at my iPhone as google maps helps us navigate to my hotel. It is a blessing no longer to have to waste time asking for directions. However satellite navigation or no navigation all my drivers have always found the destination in the end.

All my meals I eat at the same local restaurant serving possibly the best chicken curry in the world. After a few visits I find out that if I order the biryani rice, the chicken korma sauce, the salad and 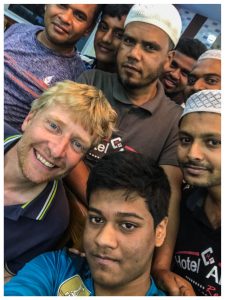 the skewered chicken roasted slowly over the open grill I get the perfect combination. The bill for this including a 7up comes to USD 2,50. Additionally I am treated a bit like a rock star when entering the restaurant. Many of the other restaurant guests ask for selfies and the three waiters – each responsible for their own row of tables – almost get in a fight over directing me to their row after they find out that I usually add a 50 cents tip and pay 3 USD for my meal.

Before sunset on my third day I visit the Wagah border ceremony on the border separating the Pakistani and the Indian provinces both named Punjab. Since 1959 synchronized military parades have been held on each side of the border. The ceremony ends with the border gate being 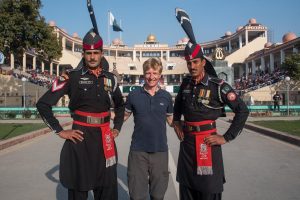 opened, the flags of the two countries simultaneously lowered and the gates then being slammed shut. The ceremony could have been instructed by John Cleese (or maybe it was this ceremony who inspired him) since the “Rangers” are performing silly walks marching with one leg lifted higher than it ought to be humanly possible. As a warm up to the real ceremony a one-legged Pakistani warrior with a giant flag shouts curses at the Indians and threatens them with his cane.

The ceremony is performed every night even when there has been military clashes between the countries (last time in September 2016). In November 2014 a suicide bomber detonated a bomb vest among the departing masses on the Pakistani side about 500 meters from the border (in 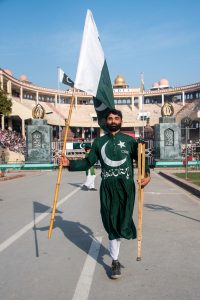 despite of the area being a heavily guarded border). 60 people died and 110 were injured. Since then searches are being performed at a check point almost 1 kilometer from the border and no bags – not even a camera bag – are allowed in.

My flight home to Denmark is also departing in the middle of the night. At least this time I am allowed to use the airport highway to get there without paying a bribe. However, at security I am requested to show the contents of my money belt and to answer “how much money I am bringing out of the country” and “If I might have some local money left”. I also – for the first time world wide – get my wiener hand searched. A firm willy-shake is hence my last impression of the very hospitable country of Pakistan.

That’s it. End of trip. One month. 7 countries. 4 new countries. New experiences and great encounters. For costs see last picture in album. Heartfelt thanks to my sweet family for letting me travel solo for a month. And thanks to everyone who has helped or followed me on my trip.