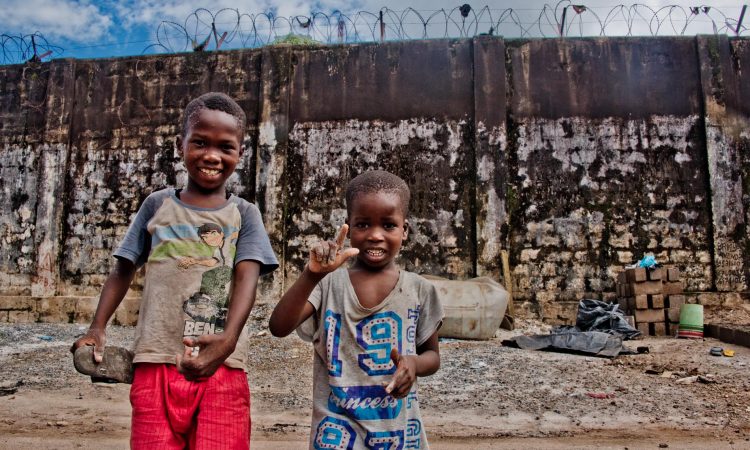 Detained by the military police in a city ruled by the devil.

Apart from once crashing with a bus in Venezuela where a German tourist I had just been talking to tragically died this describes my single most awful travel experience ever.

On a peaceful Sunday I was walking around central Conakry with my camera. People here were very hostile towards picture taking. Of course that should have taught me. Unfortunately, it did not. In town I passed the huge city prison where those in charge of the latest military coup were imprisoned. At the end of the prison wall I saw a military tent and a pick-up truck armed with a machine gun. The backdrop was blue sky and white skies and the gravel road was muddy and full of holes filled with water from the recent rain. In short: a nice photo. Of course I know that in a places like Guinea (formally now a democracy but not long ago a military regime) taking photos of military installations might get me in trouble.

But as I said. It was a nice photo. I checked for soldiers and none were around. So I took the shot. Not once. Not twice. No of course I idiotically wanted to improve the angle a little more. So I took yet another.  I am pretty sure had I taken only two I would have escaped unnoticed. But when taking the third photo someone shouted at me. I did not know who. I could not tell from where the shouting originated.

So I started half-running away from the sound. A guy suddenly grabbed and held on to the strap of my camera bag. I tried to break free. I shouted at him. I tried running and doing so broke my t-shirt that he was now also holding firmly on to. He then pulled a small patch of cloth from his pocket and declared himself (in French of course) to be a plainclothes policeman. Four military police officers had in the meantime emerged from their base in the tent. Under strong protests I was escorted to the tent.

Inside there were about 10 soldiers or military police officers. I couldn’t quite tell the difference. Most of them in army uniforms. The boss was a thin guy who was a little less erratic than the rest of the gang. He was the only one to wear a blue uniform. I was ordered to sit on a small, wobbly and crappy wooden bench in the middle of the tent.

It felt like it was 50 degrees inside the tent and no air was coming through. Everyone spoke only French (I speak reasonable French but do not understand everything especially in regards to 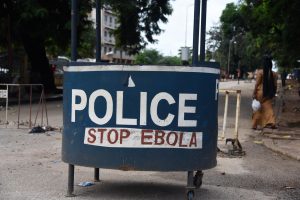 legal/juridical terms). For the next three hours I was – in french and in french only – accused of being: a spy, a terrorist, of taking photos without permission, of taking photos of military installations, of taking photos of a prison where the ones responsible for the latest coup were sitting, of violently fighting, shouting at and harassing a policeman on duty (the plainclothes guy – I kept claiming that I thought he was trying to steal my camera) etc.

They kept saying they were going to throw me in jail. They kept asking me to call my embassy (I would have liked to but could not since my Danish mobile phone was not operational in Guinea – I had just flown in the same morning and had no local SIM-card). They then tried to take my camera away from me with force (they did not succeed but almost broke my camera). They insisted that I DID NOT erase the photos I had taken (and that I had by now admitted to them that I had taken) since it was “evidence”.

I obviously kept saying that I did not know it was illegal to take a photo.

Now of course I knew that this was most likely just a scam to relieve me of a little cash. But every time I offered them money for the first TWO HOURS they just declined and said that this had nothing to do with money (!?).

I finally showed them the photos. While doing so I insisted the plainclothes psychopath who almost broke my camera would stay away. He did. When looking through the photos I simultaneously deleted the five most incriminating ones (the three of the military base and two previous ones showing the prison wall). When they found out what I had just done they went bananas. They shouted that I was provoking them. That I was playing with them That I understood everything in French and was just tricking them. They shouted that now I was surely going to rot my life away in prison. The commander then lifted his mattress and took out his AK47 from under it. He did not point It at me. He just placed it next to him on the bunk bed on which he was sitting.

An interrogation report was written – in hand, in French and taking up a full A4 page. They kept trying getting me to sign. I kept refusing signing something I did not understand. But you speak fine French they said. I may be able to make myself understandable but I do not understand everything I (truthfully) replied .

It went on and on. Good cops, bad cops, shouting, harassment, threats. My mouth was completely dry. It was ten against one. It was in French (my fifth language). I was shattered. I had had enough.

I took the boss aside and said that I was really sorry if I had violated local laws and asked if it was in anyway possible that a small fine might amend the problem.

I assumed that this was what they had been waiting (a very long time) for. Still he flatly declined. But I could sense we were on the right path now. I kept offering to pay. Of course I could just have kept refusing but I had had enough. I needed to get out of there. So I kept asking the same 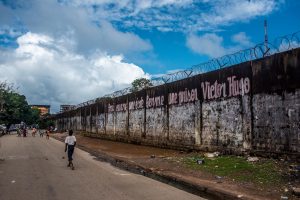 question in different ways. In the end he asked how much I thought would be appropriate. “100.000 Guinea Francs” (10 Euro) I said. “Not enough” he of course replied. I offered 200.000. Give me the money he said. I gave them to him. “Now I am going to call my boss and see what we can do” he just replied.

When he came back he asked me to sign my confession. What the hell I thought. “But I thought when I paid I didn’t have to sign” I said. They all started shouting again. I had to sign.

In the end they wrote a shorter declaration in French and helped me deciphering the handwriting. I understood it this time. It just said I had taking a photo of military installation and that I was aware that it was against the law. I said that I was not aware it was against the law when I took the photo and asked if I could write a statement myself in either English or French. They declined. I then tried to have their declaration altered. They declined.

I asked the commander if they would let me go if I signed. He said yes.

I thought about trying to call their bluff and just saying – well yeah then take me to jail. But I feared that they actually possessed the power to make me stay the night (or more) there. I just didn’t know.

So I gambled wildly. After three hours I signed. A handwritten confession in French that I wasn’t certain that I had completely understood. I then got up – ready to leave.

“Sit down” a young arrogant soldier with a trimmed head then said.

“Now we need you to sign the long declaration” the commander said.

I was caught between the devil and the deep blue sea. Very alone in an extremely troubling situation.

The commander then told me that they needed the longer statement “In case I would afterwards come after them for corruption!” – so that could explain it I thought. They scare the shit out of me. They make me offer the bribe myself. They make me sign that I know I did something illegal – and their asses are of the hook in case anything backfires. Makes sense I thought. But what about my ass? Could they be bluffing just to make me sign and then actually imprison me?

So I started trying to understand the long declaration. They helped me explain the words where I could not read the handwriting (…). It had lots more personal details about me, my job, my family, my hotel etc, than the short one I had just signed, but apart from that it basically said the same. I had taken illegal photos. At least that’s what I thought it said.

So after 3 hours and twenty minutes I also signed the other declaration. And then I got up – ready to walk.

“Sit down” the commander said.

(hehe – you may think I am making this up but it is the god honest truth..)

I could not believe it. “But you just said”.

The trimmed brutal young guy came over and started shouting. About terrorism and spying and violence against and officer. His conclusion to this long rallying was that they now needed another 300.000 Francs.

I had that exact amount left in my pocket (and not a dime more in any other currency). But now I was just plain mad. I am a redhead with a fierce temper and I had just had it. They were lying, deceiving assholes and they did not deserve a dime. So for maybe 10 minutes I just sat starring down the floor while they were taking turns shouting at me.

So I went. After 3,5 HOURS OF HARRASSMENT. Home to a night with horrible nightmares. I woke up at 2 AM and could not sleep. As I had not suffered enough my stomach was now starting to give me trouble. The next day I had planned to write. But I was still too much in a state of paranoia and disbelief to write anything. So for all day I practically did nothing. Nothing but fearing that the police would come to my hotel and find my and start their interrogation over. 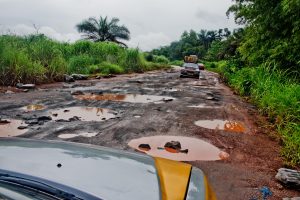 After this in every way super pleasant and service oriented experience in truly pleasant Conakry I took a taxi to the border with Sierra Leone. The 118 km took 5,5 hours. We went on the most god awful (major) roads that I have ever ridden (this Is the highway between two countries – see the pics). We were demanded bribes five times in order to pass the checkpoint. (read the full report by translating the Danish post on facebook if you want).

I can very safely say that Guinea is by far the worst country I have ever visited. Quite frankly – In Guinea  it is the devil who has won.