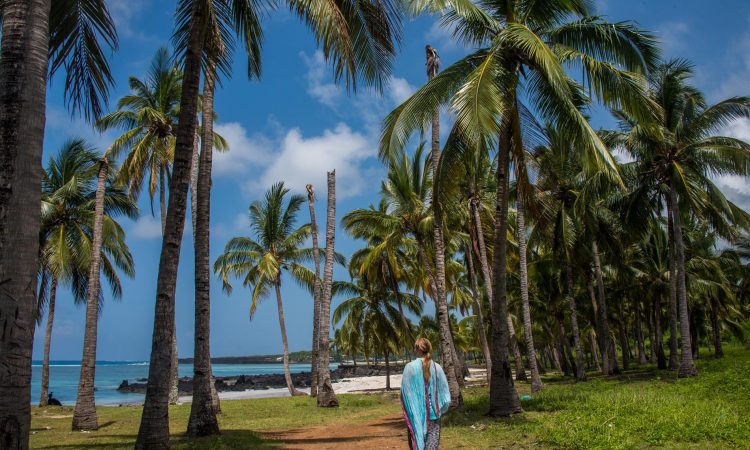 The island nation of The Comoros ranks among the countries least visited by tourists. It is situated between Madagascar and mainland Africa and only a few airlines have the destination on their 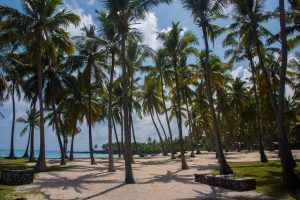 route maps. One of them is Air Madagascar. After a bit of trouble with my ticket my journey starts (Air Madagascar changed the return flight to go via Mayotte, Travelgenio that I had bought the ticket through took forever to ‘revalidate’ it with the new flight info – so I didn’t get a valid ticket until two days before the flight).

The Comoros used to be a French colony. Hence it is a good place to be if you speak French or if you like French food. Like more or less every other tourist or NGO worker who have been to Gran comores – the main island –  I stay at ‘Jarden de la Paix’ – ‘The Garden of Peace’. I pay 50 Euro a night with breakfast and aircon – The Comoros is not a particularly cheap destination. On the menu is ‘Langustine’ – lobster – with curry and mashed

potatoes (12 Euro). Like in many other poor fishing countries the price of lobster and chicken seems to be roughly the same, so obviously I go for the lobster.

I then walk around downtown Moroni, the capital. The country is 99% (sunni) muslim. The remaining 1% are Christian immigrants primarily from France. Everywhere local men are walking about in their long – mostly white – ropes and carry the traditional muslim hat. The women are clad in long colourful gowns and wear veils. Unfortunately, Most of them do not want to be 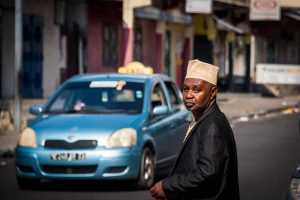 photographed. A shame since a few of the ‘Madames’ at the big Sunday market have yellow paste smeared in their faces which would have made for an interesting photo. There is garbage everywhere in the streets and as soon as I turn away from the main roads people are living in corrugated shacks. The air is moist, and the heat is intense and here in the rainy season it feels like one of the hottest places I have ever been.

The next day for 40 Euros I hire friendly Ibrahim to take me around the island in his old Renault Clio 3. He is 32 years old and has a boy and a girl aged 7 and 11. Ibrahim is clearly and entrepreneur. Constantly he phones people,  stop to hand money to friends along the route and texts repeatedly while driving. The landscape is rugged and mainly made up of black lava rock. Ibrahim tells me (in French) that it is caused by “a catastrophic volcanic eruption in 1975 and a smaller one in year 2000’. He also tells me that there is 5.000 people living in The Comoros plus around 2.000 Chinese road construction workers”. I later find out the population of The Comoros is around 800.000 people so apparently what Ibrahim has been telling me needs a little verifying… (I haven’t fact checked the eruption info since the internet here in the Comoros is super slow.)

Around the northern tip of Gran Comoros lies the volcanic lake of Lac Sale. Allegedly no one knows how deep it is. It is surrounded by palm trees, mountains, coast and sea and is a spectacular vista.

To my great surprise the northern beaches are even more beautiful than those on The Seychelles and Madagascar. At the Maloudia-beach (meaning wave-beach in Comorian) two days prior the president has laid down the first stones for a new 5-storey luxury resort. The corporation behind is called ‘Armada Dubai’. “Here are no other resorts and the only other upmarket hotel in the Comores went out of business about fifteen years ago” UK-born but Dubai-based project leader for the construction tells me. And adds: “but with these beaches I am sure they are going to come”

The wave-beach also holds the only restaurant I can find anywhere on the north coast. Fish with rice and tomato sauce must be ordered two hours in advance. When it finally arrives so does Emily from Minneapolis as if out of nowhere. She has learned the local Comorian language and is living in a nearby local village, works with the peace corps, has stayed with the locals for 1,5 years 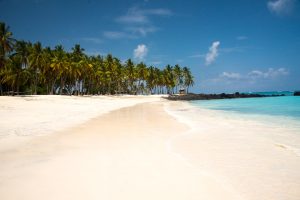 teaching them English and has another year to go before she will go home. She tells me that she absolutely loves the simple life (‘though my phone is often dead’) along the wave beach and the two adjacent and almost equally beautiful beaches. ‘We have had no electricity for 20 days’ she tells me. ‘-Except for when the president was here, and they turned on the generator for a couple of hours. They also told us not to expect any electricity for the next 45 days’ she says looking like someone who does not think this is much of a problem.

Unfortunately, I only have three days / two nights in the Comoros. But after having eaten well, having seen the Sunday market, having spoken French with locals and friendly people working for NGO’s and having done a tour of the main island I don’t really know what else to do here (except going to one of the other islands but I unfortunately have no time for that). Grand Comoros, I find, has okay friendly locals, a beautiful volcanic lake, some surprisingly nice beaches and is not a bad place for people wanting to practice their French.