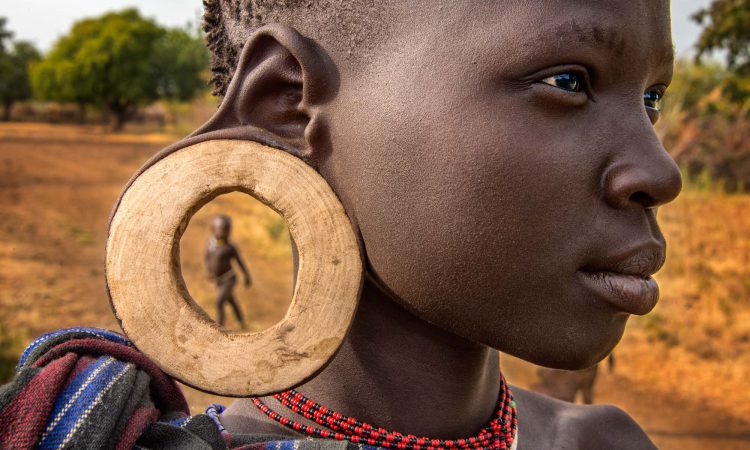 With a bit of anxiety  we reached the Mursi village. After 17 hours of tough travelling from Addis Abeba we found the village where we would stay for the coming week. Fortunately the roads had dried up after the rainy season so we did not get stuck on the way.

For 15 years visiting the Mursi had been on the top of my bucket list.. Now we were finally here. However Mursi people are known to be hostile to foreigners and sometimes intoxicated from homebrewed alcohol.

Through my travel network I had come into contact with Andualem – our fixer/guide and chairman of the Omo Valley Guide association. He claimed to be the only guide in the valley to bring visitors camping with the tribes. And he said only around 5 times a year he brought people to the remote village we went to (typically journalists/photographers).

It turned out that we had no reason fearing the Mursis. They were kind and curious. Bringing two blond kids aged 6 and 8 probably did not make things worse.

During the week we were there we attended the following ceremonies:

During day the Mursi men went herding their cattle. Mursi women were cooking and working in their village. We spent the days playing with the kids (we had brought frisbees and water guns) and talking to the women. Mursi children do not go to school. My daughter Ava tried to teach them danish from her school books. And Charlotte assisted as call-in doctor with her supply of antibiotics etc.

After the Mursi visit we spent a few days driving around in the Omo valley: